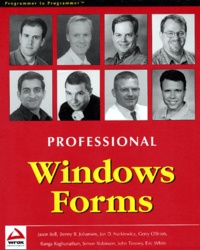 Microsoft has invested much time in dramatically improving how we create interfaces for client-based applications - Windows Forms is the result. Developers building Windows-based applications can use their .NET language of choice to create rich, flexible, data-aware Graphical User Interfaces that benefit from the full support of the .NET Framework classes. This book will show you everything you need to know about this new technology so that you can build any application with ease. It covers the broad spectrum of Windows Forms programming, including form and control creation and manipulation, as well as discussing distributed programming topics - including consuming Web Services from Windows Forms. It also contains a wealth of practical examples, which demonstrate Windows Forms in action. Example topics include how to expose Windows Forms in Web Browsers and how to deploy Windows Forms applications. Coverage concludes with a sophisticated case study that uses Windows Forms to create a powerful website development environment. Who is this book for? This book is an essential read for developers with at least basic to intermediate knowledge of either C# or VB.NET, who want a comprehensive guide to using Windows Forms (as opposed to VB6 or MFC forms) to develop their applications. What does this book cover? Introduction to the .NET Framework and Windows Forms in this context